It is known that water plays a central role in biological and chemical, especially acid-base, processes. Equally important to our understanding of the structure and dynamics of water is understanding the role it plays as a solvent facilitating long-ranged charge transport of species such as ions, excess protons and hydroxide ions. The excess proton and hydroxide ion, both particularly important in acid-base chemistry and biomolecular function, introduce unique challenges to modeling and simulation due to the molecular mechanism by which they effectively hop between water molecules and other ionizable species. This hopping mechanism by which water molecules and ions switch identities without significant molecular rearrangement, termed Grotthuss shuttling, occurs over multiple timescales and requires a simulation methodology that is capable of dynamically adjusting the chemical bonding topology as the excess or depleted proton traverses a constantly rearranging environment of solvating molecules.

Ab initio simulations, which explicitly account for electronic degrees of freedom and naturally account for the evolving rearrangement of chemical bonds, are generally limited to small representative systems short timescales, or extremely approximate levels of ab initio theory due to their computational expense. A class of alternative methods that have proven particularly useful in modeling these complex chemical processes are the multistate reactive molecular dynamics (MS-RMD) algorithms. In these methods, the system is described as a linear combination of chemical bond topologies (states), the weights of which evolve over the course of a simulation in response to the changing environment. While such methods are generally applicable to any chemical reactions, our group has developed MS-RMD for the simulation of solvated hydronium and hydroxide ions. We have shown that these multistate reactive models can be parameterized directly from assessable condensed phase ab initio simulations, resulting in models that reproduce the thermodynamic and dynamic properties of the original simulations at a fraction of the computational cost. Recent developments in force-matching algorithms have even been able to reduce, if not completely eliminate, the empiricism of reactive models by describing all effective interactions with flexible tabulated potentials. By first validating the results from these models against current state-of-the-art ab initio simulation methodologies, the molecular mechanisms of important processes in complex condensed phase environments can be investigated at time and length scales beyond the current capabilities of the high-level reference calculations.

In order to study concentrated acidic and basic solutions with multiple protons and hydroxide ions, one can generalize the reactive multistate algorithm in a straightforward manner. This, however, proves to be prohibitively expensive due to the large number of states that need to be included. Instead, a self-consistent iterative scheme has been developed that allows for a computationally tractable simulation of multiple reactive species simultaneously undergoing chemical transformations. The combination of this flexible reactive multistate simulation methodology and reactive models constructed directly from condensed phase ab initio simulations enables the efficient simulation of chemical processes that require multiple time and length scales for a proper description. The solvation structure and transport of excess protons and hydroxide ions is currently under investigation by our group in a number of aqueous systems including bulk water and the air-water interface.

Proton transport plays a pivotal role in biological systems.  From modulating biomolecular interactions to establishing transmembrane electrochemical gradients, protons are a ubiquitous currency for biological transformation.  The Voth Group has studied proton transport in biological systems, including channels, tranporters, enzymes, and proton pumps, with the reactive simulation methods described above for well over a decade. 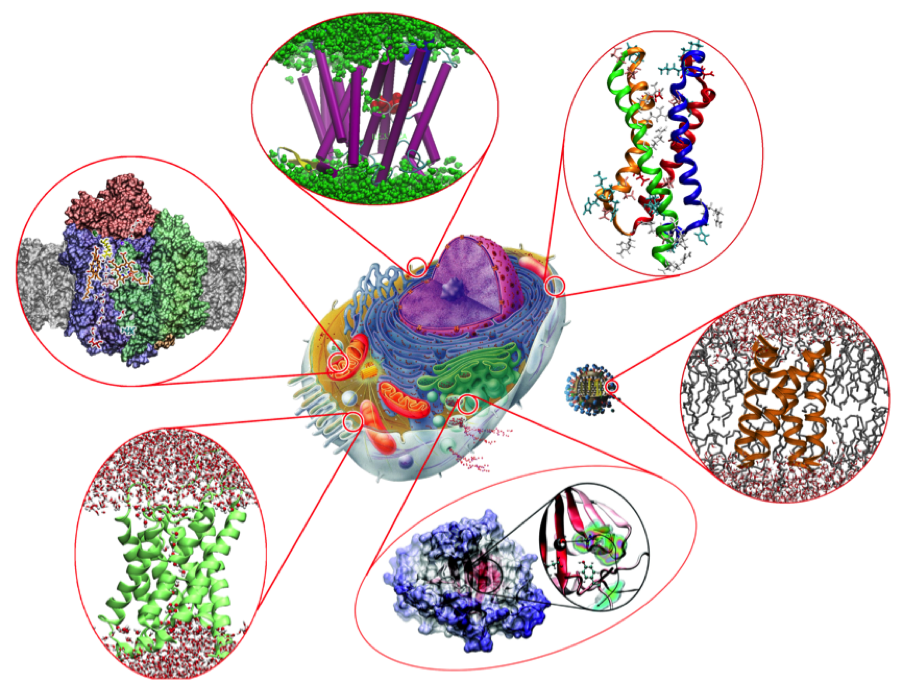 In these studies mechanistic insights have been revealed by analyzing the reaction pathways of proton transport, the corresponding fee energy surfaces, and the role of solvation and protein dynamics.  Several important conclusions can be drawn from these previous studies: (1) proton transport occurs through a highly dynamic network of water and ionizable residues that is substantially different from that seen prior to proton diffusion; (2) protonatable amino acids can play a range of roles in proton diffusion from direct ionization to partial charge delocalization to simply controlling solvent dynamics; (3) mechanisms revealed by free energy surfaces can be drastically different from those suggested by minimum energy potential energy pathways (ie, entropy is crucial); and (4) amino acids display interesting trends across biological systems.

Current projects in the Voth Group include: 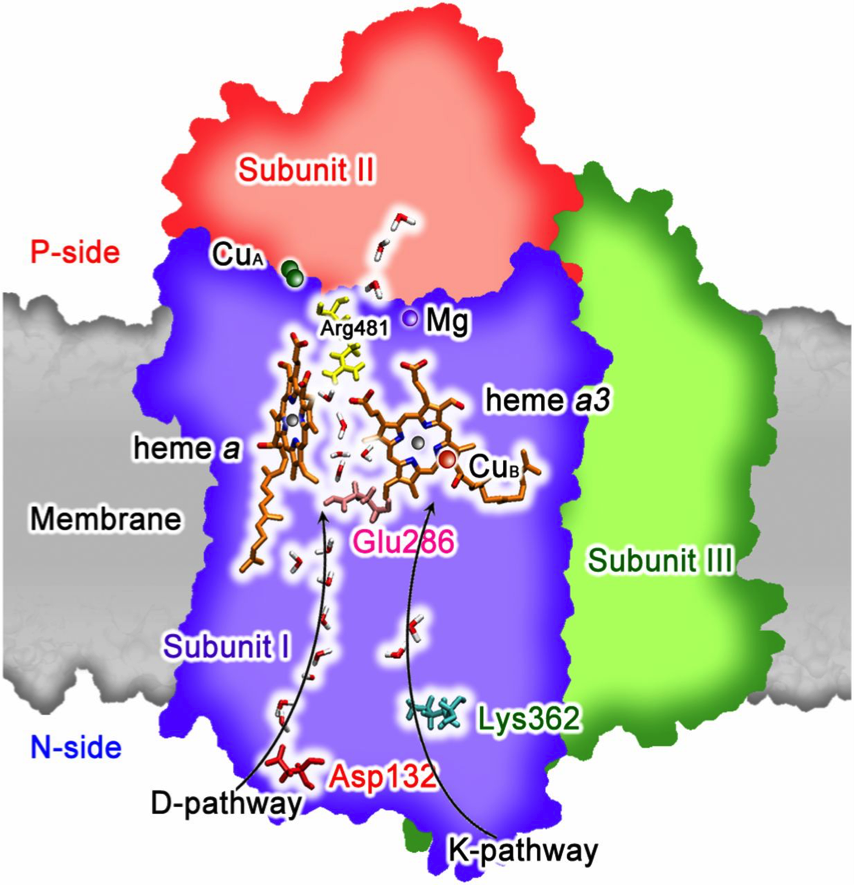 Cytochrome c oxidase (CcO) is the fourth complex in the mitochondrial electron transport chain and is one of three types of proton pumps that function in cellular respiration. It catalyzes the reduction of O­2 into H2O and uses the released energy to pump protons from the negative inside (N-side) of the membrane to the positive outside (P-side). CcO transports electrons from cytochrome c (on the P-side of the membrane) to its active site (where O2 reduction occurs) through multiple metal centers: the copper cluster (CuA), heme a, and the binuclear center (BNC), which consists of heme a3 and another copper site (CuB). Different redox states of the metal centers formed by electron transfer provide the driving force for proton pumping. In each catalytic cycle, four “pumped” protons are transferred from the N-side to the P-side of the membrane.

The influenza A M2 (AM2) channel is a low-pH activated transmembrane protein that plays a crucial role in the viral life cycle by transporting protons across the viral capsid to acidify the virion and initiate uncoating of the viral nucleic acids.  The AM2 channel transports protons into the influenza virus upon acid activation, and current work in the group uses multiscale simulation methods to provide a computational characterization of the mechanism. Our results show that lowering the pH value gradually opens the Trp41 gate and decreases the deprotonation barrier of the His37 tetrad, which acts as a pH sensor and proton selectivity filter, leading to channel activation. The asymmetry of the proton transport free energy profile under high-pH conditions qualitatively explains the rectification behavior of AM2 (i.e., why the inward proton flux in allowed when the pH is low in viral exterior and high in viral interior, but outward proton flux is prohibited when the pH gradient is reversed).

The ClC family of transmembrane proteins function throughout nature to control the transport of Cl- ions across biological membranes. ClC-ec1 from E. coli is an antiporter, coupling the transport of Cl- and H+ ions in opposite directions and driven by the concentration gradients of the ions. Despite keen interest in this protein, the molecular mechanism of the Cl-/H+ coupling has not been fully elucidated. Our group has used multiscale simulation to help identify the essential mechanism of the Cl-/H+ coupling. We find that the highest barrier for proton transport (PT) from the intra- to extracellular solution is attributed to a chemical reaction, the deprotonation of glutamic acid 148 (E148). This barrier is significantly reduced by the binding of Cl- in the “central” site (Cl-cen), which displaces E148 and thereby facilitates its deprotonation. Conversely, in the absence of Cl-cen E148 favors the “down” conformation, which results in a much higher cumulative rotation and deprotonation barrier that effectively blocks PT to the extracellular solution. Thus, the rotation of E148 plays a critical role in defining the Cl-/H+ coupling. We have also simulated PT in the ClC-ec1 E148A mutant to further understand the role of this residue. Replacement with a non-protonatable residue greatly increases the free energy barrier for PT from E203 to the extracellular solution, explaining the experimental result that PT in E148A is blocked whether or not Cl-­cen­ is present. The results of our work suggest both how a chemical reaction can control the rate of PT and also how it can provide a mechanism for a coupling of the two ion transport processes.