U.S. reliance on fossil fuels is increasingly recognized as a substantial threat to national energy security and a source of global climate change.  The development of batteries and fuel cells may provide viable clean energy alternatives for replacing internal combustion engines in automobiles and for powering personal electronics. But despite decades of research, these technologies continue to lag behind fossil fuels in performance and cost. Breakthroughs are hindered both by a lack of understanding of transport and catalytic mechanisms as well as the complexity of modeling chemical processes in the individual components of fuel cells, in addition to modeling dynamics at the interfaces between each component. The Voth group develops computational tools based on multiscale theory to examine and predict the behavior of complex systems. These methods use high-resolution information, such as quantum calculations, and rigorous statistical mechanics to systematically construct simple models that retain the essential physics. A key area of research is the study of materials that are relevant to renewable energy technologies, such as proton and anion exchange membranes. Brief descriptions of the fuel cell related projects underway in the group are given below.

Fuel cells form a class of promising “green” energy technologies which generate electricity from simple reactants, i.e. hydrogen and oxygen gas, and produce environmentally benign waste in the forms of water and heat.  The basic chemistry responsible for their operation is well understood for proton-exchange systems:  the hydrogen molecules are broken apart at one electrode to produce free electrons which then traverse an external circuit before recombining with positively-charged protons and oxygen at a second electrode to form water.  The latter reaction depends heavily on the ability for protons to migrate between the two electrodes, which are separated by a proton electrolyte (exchange) membrane.  In order to improve the efficiency of fuel cells and overcome issues of cost and durability, novel membrane materials that are highly proton conductive must be developed to facilitate proton transport. While several membranes are currently on the market, their properties are not well understood. Hence, developing new membranes will first require understanding the conductivity of current state of the art materials. The Voth group’s research involves investigating these properties over a range of length scales, from the level of individual atoms to length scales closer to present engineering efforts.  To accomplish this task, the group has developed a novel reactive simulation methodology to determine the detailed proton movement within water pores in the membrane in addition to using large-scale atomistic simulations to examine the size and shape of the water pores. Information from these simulations is then used to parameterize very large-scale coarse-grained simulations, which allow analysis of the behavior of the membrane as a whole. This multiscale investigation will provide a wealth of information and predictive capability to drive the development of proton exchange membranes technology. 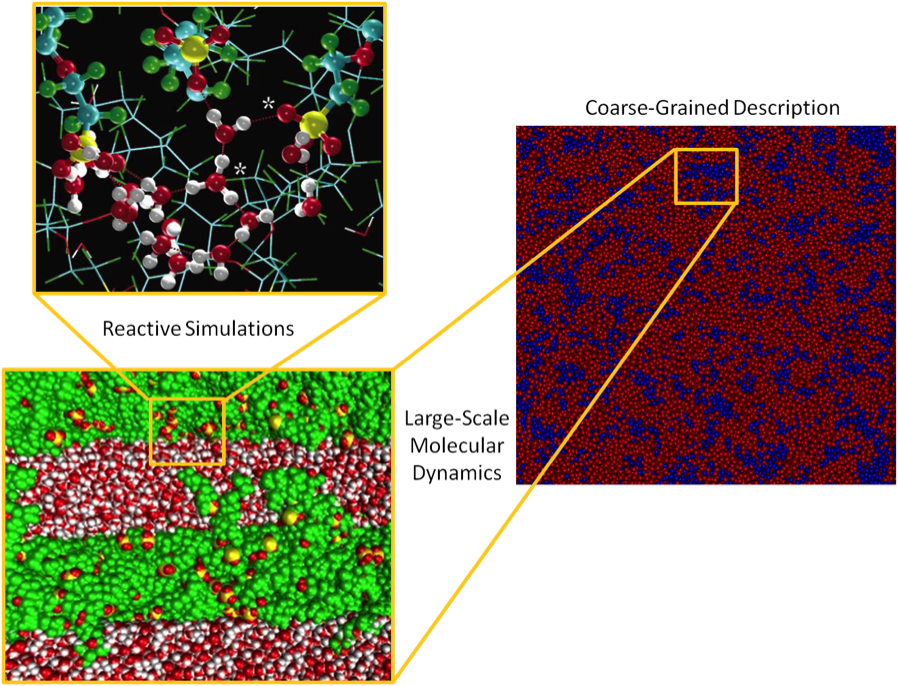 Recent work investigated the effect of side chain by examining proton transport in two PEM materials, Hyflon and the 3M membrane, at various hydration levels. The interaction between the sulfonate group of the polymer side chains and the hydrated protons was found to have only a small influence on the proton transport dynamics. Instead, proton swapping between sulfonate groups is the primary transport mechanism for the proton transport within the pore. The larger water clusters and more flexible side chain of the 3M membrane allows for an enhancement of this swapping mechanism compared to Hyflon. Membranes that can enhance this mechanism may result in greater proton conductivity.

Understanding the role of membrane morphology in defining their proton transport behavior is also crucial for the development of the next generation of proton exchange membrane fuel cells. In a recent study, we built large-scale simulation models of three of the most realistic PFSAs morphologies proposed from the results of SAXS experiments and then examine the cation solvation and transport properties of these models. Upon equilibration with molecular dynamics, we find that a bundled, nanorod morphology immediately flattens into ribbons, in agreement with the locally flat model. The lamellar model, the extreme version of the locally flat model, shows much too fast dynamical properties and too low density. The random model shows acceptable agreement with experiment; however, the bundle model shows the best overall agreement. 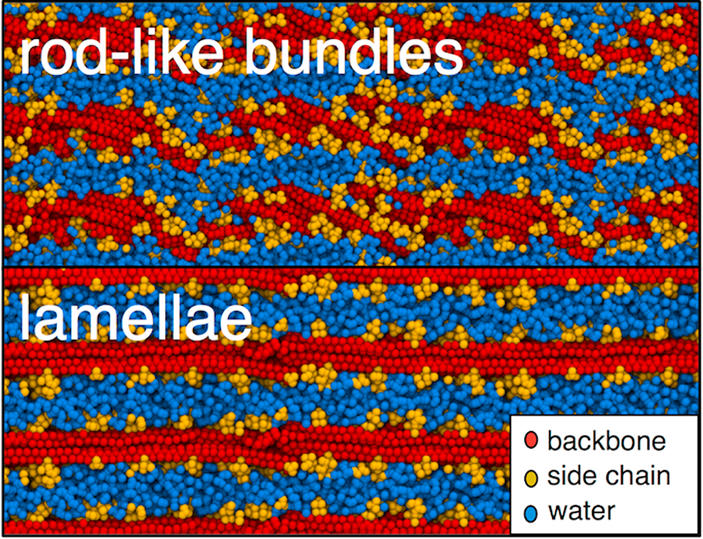 Although proton exchange membranes (PEMs) have received a lot of attention, their wide spread use has been hampered by cost, durability and fuel versatility. The Voth group has been working on alternative fuel cell technologies that employ anion exchange membranes (AEMs), which have numerous advantages over PEMs including compatibility with non-precious metal catalysts. Unfortunately, AEMs also show insufficient chemical stability and poor ionic conductivity. The Voth group is working to develop and characterize AEM materials to circumvent these challenges. A key aspect of our effort is to understand the solvation and transport of hydroxide in the highly basic environment of the membrane. Hydroxide can be transported in water via standard vehicular diffusion or by a proton “hopping” from a neighboring water to the hydroxide ion, such that the two species swap identities. 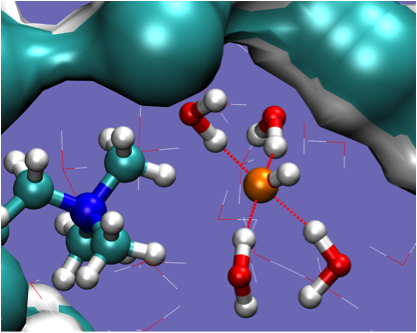 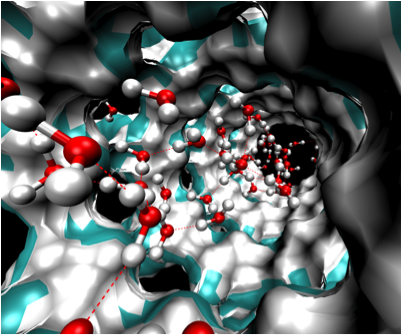 Figure 3: On the left, a hydroxide anion is shown (orange) with four-fold coordination by water molecules and interacting with a benzyltrimethyl ammonium cation in an AEM. The way the cation interacts with the hydroxide anion may cause the solvation structure in the membrane to be different than in aqueous solution. On the right, a hydrogen bond network of water molecules is shown spanning a cylindrical cavity in an AEM, which may be important for facilitating anion transport through the membrane.

We recently developed a new multiscale reactive molecular dynamics model for hydroxide in aqueous solution, which was then subsequently modified for an AEM material. With this model, we investigated the hydroxide solvation structure and transport mechanism in the membrane. We found that a relatively even separation of the rigid side chains produces a continuous overlapping region for hydroxide transport that is made up of the first hydration shell of the tethered cationic groups. Our results show that hydroxide has a significant preference for this overlapping region, transporting through it and between the AEM side chains with substantial contributions from both vehicular and Grotthuss mechanisms. 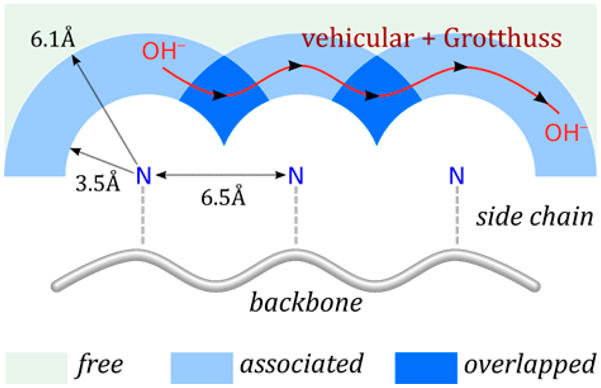 Figure 4: Schematic of proposed mechanism for OH- transport in AEMs.

The Voth group has also studied the influence of electrodes and electric potentials on ion transport in electrolytes. The group has developed computationally efficient methods for treating the electrostatic interactions between polarizable metallic electrodes. This method is applied to study proton transport in ulta-thin electrolyte layers, as well as at platinum interfaces. 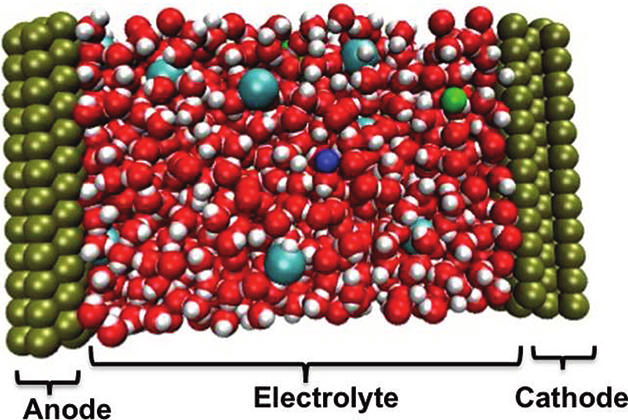