Theory of Coarse-Graining and Multiscale Phenomena

Theory of Coarse-Graining and Multiscale Phenomena

The Voth group develops theoretical and computational frameworks to study multiscale phenomena in biology and materials science. We work on both new theoretically-informed conceptual models as well as more quantitative, systematic, bottom-up modeling methods. Since 2005, our group has been one of the leaders in the development of methods for defining coarse-grained (CG) interactions from atomistic simulations in the condensed phase. We have since contributed to systematic methods for defining optimal choices of coarse-graining mapping, observable representation, and effective interactions for large biomolecules. Also, we have developed new enhanced sampling methods, the ultra coarse-graining framework, and new approach to coarse-grained dynamics. We aim to research novel mapping schemes and reactive coarse-graining methods in the future. The development of these methods is tightly coupled to our work on molecular and reactive simulations.

The Theory of Multiscale Coarse-Graining (MS-CG)

The multiscale coarse-graining (MS-CG) methodology provides a systematic, bottom-up way to calculate effective CG interactions based on rigorous statistical mechanics. It seeks to approximate the many-body potential of mean force by variationally minimizing the difference between CG forces at the mapped fine-grained reference forces (a.k.a, “force matching”). This method is related to liquid state theory and the Yvon-Born-Green equation. The code implementing the MS-CG methodology is available for download here and is available as a fix in LAMMPS through the OpenMSCG package.

Recent methodological work on MS-CG has included the inclusion of three-body interactions as well as formulations for both the constant NVT and constant NPT ensembles. We have also explored center-of-charge mappings as an alternative to the more traditional center-of-mass and center-of-geometry mappings. MS-CG models have been applied to wide range of systems including common solvents (e.g., methanol, hexane, water, ionic liquids), membrane systems, carbohydrates, polyglutamine aggregation, peptide secondary structures, and larger proteins.

Using MS-CG, the sensitivity of coarse-grained models to changes in the underlying FG model from which it was derived can be studied. This method provides a low-noise, computationally efficient way to calculate this sensitivity. The sensitivity can be used to accurately calculate alchemical transferability across interaction parameters to first order at low computational cost. Additionally, we used MS-CG to investigate the challenges of representing observables in CG models. We present a condition that can ensure that a CG observable reproduces the distribution of the FG observable projected onto CG model.

Recently, we extended the MS-CG methodology by explicitly including the order parameter dependent interactions to better reproduce the structural correlations at the inhomogeneous system. Another extension was to develop a theoretical methodology of coarse-graining for the quantum mechanical regime based on the MS-CG methodology. For the quantum MS-CG (qMS-CG) method, the Feynman path integral description of quantum statistical mechanics was combined with the variational force-matching method. 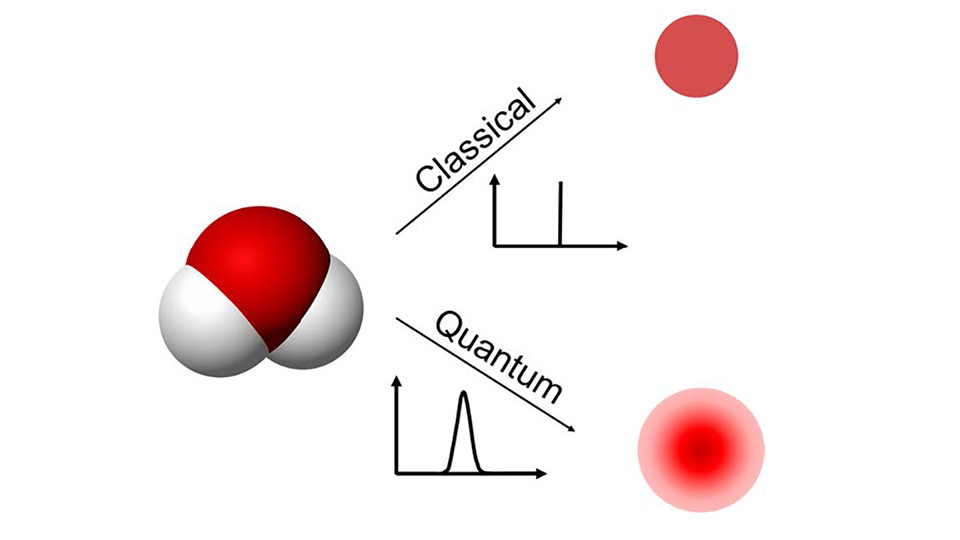 The Theory of Ultra-Coarse-Graining (UCG)

We developed a new systematic framework for coarse-graining by incorporating internal state variables with configurational variables into CG beads. This UCG he development of this method is actively ongoing. In the current UCG framework, two different internal dynamics are rigorously explored: rapidly equilibrating (in a local equilibrium) or rarely switching (Markov-state). For the rarely switching dynamics, we constructed the UCG model at ultralow resolution that combines particle-based and Markov-state-based modeling to allow for dynamics both of and within coarse-grained beads. From the developed UCG model, we studied the limit where state switching is rare compared to the time scale of particle motion. 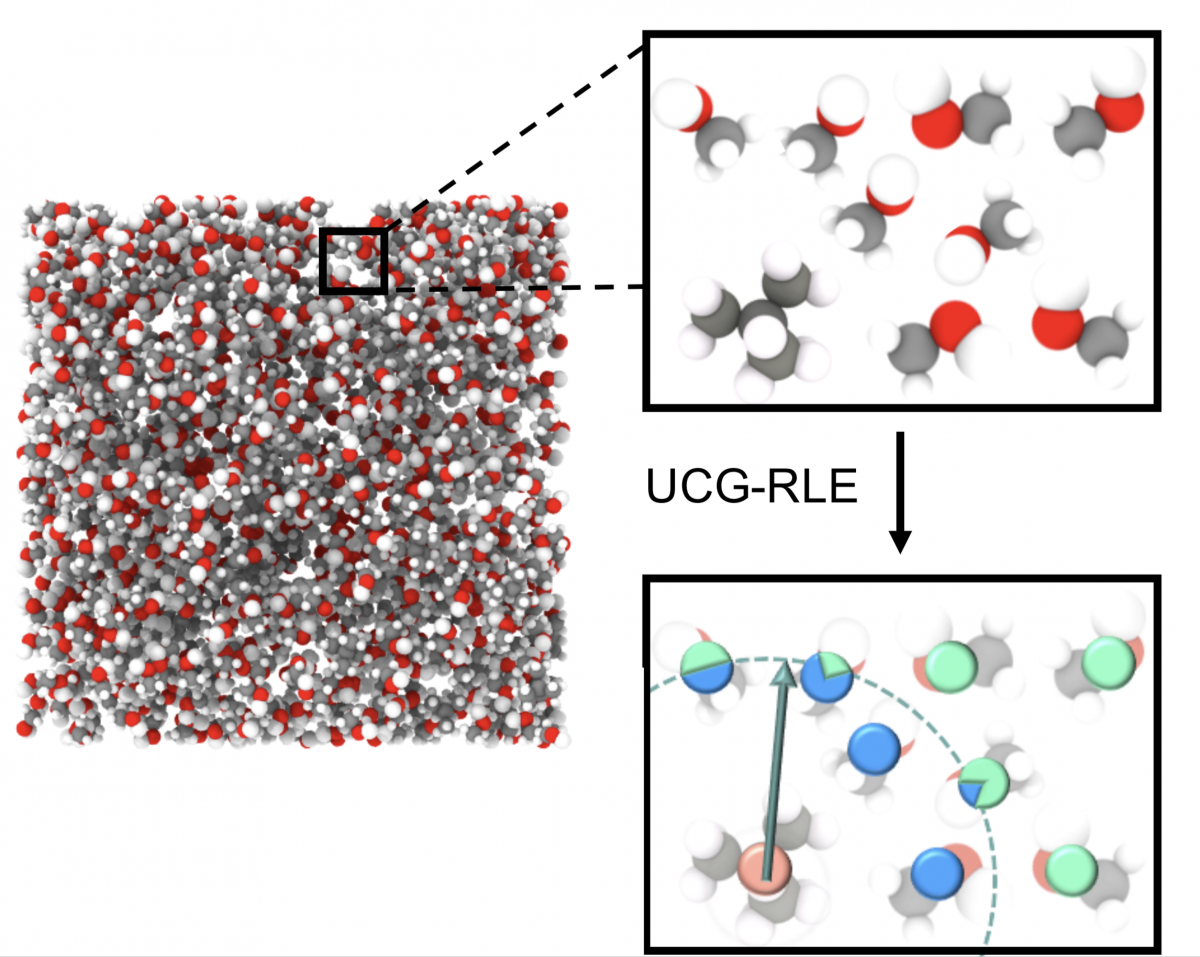 For the other extreme where the internal CG states are in a rapid local equilibrium, the UCG force field is obtained by mixing standard CG force fields in terms of local order parameters where the degree of mixing is regulated. We designed the UCG theory for this limit to embed an environmental dependence and many-body effects to the CG force field. To modulate the interactions between the UCG beads, we focused on order parameters in various systems ranging from hydrophobic association to inhomogeneous interfacial systems. Compared to the standard CG approach, the developed UCG models can faithfully recapitulate the structural correlations more accurately. More fascinatingly, we recently demonstrated that this UCG approach can impart transferable CG interactions from the bulk system to the interfacial systems (liquid-vapor or liquid-liquid interfaces). Currently, we are working on applying the UCG methodology to complex biomolecules or liquid phenomena. 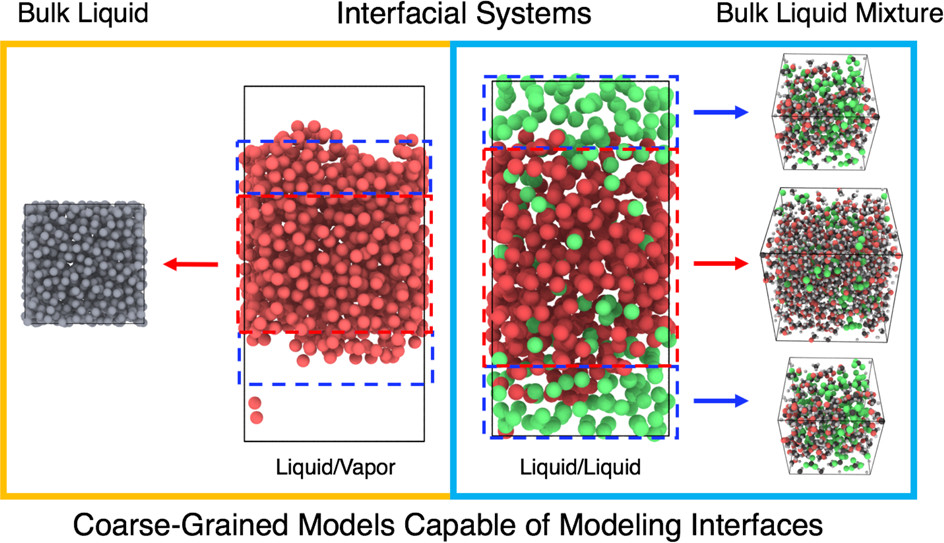 Due to the dramatic reduction in the number of degrees of freedom (DoF) that is achieved through coarse-graining, the dynamics in the CG system is usually sped up. However, the interpretation of CG dynamics is often difficult due to the inhomogeneous acceleration of diffusion and transitions. This is due to the removal of the fluctuation forces on the CG sites after the DoF reduction. Our dynamic force matching method allows for the reintroduction of those fluctuation forces into the CG model through “fictitious particles” in a way that does not significantly affect the computational efficiency or the equilibrium properties of the CG model. In our first paper, we showed that this method can accurately reproduce the diffusion rate and reasonably represent the short-time dynamics. Additional developments have allowed us to simultaneously reproduce multiple long-time properties (such as self-diffusion rate and rotational relaxation rate) as well.

Creating coarse-grained models that properly reflect the underlying physics and chemistry inherently requires having robustly explored the phase space defined by the fine-grained model. Moreover, it is important that the model be parameterized correctly in order to have simulations properly reflect behavior seen in experiments. The Voth group has sought to ameliorate difficulties related to both aspects of the sampling problem.

First, in order to ensure robust sampling, the Voth group makes extensive use of free energy methods, which enhance the exploration of phase space along chosen collective variables (reaction coordinates) in the system. We make extensive use of both umbrella sampling and metadynamics. We have recently put a substantial amount of effort into the development and benchmarking of new metadynamics variants. In particular, our group first proved that the well-tempered version of metadynamics converges asymptotically to the exact free energy of the system. Then using the conditions for convergence, we were able to design new methods, such as the transition tempered metadynamics method, which first uses untempered metadynamics to enhance exploration, then tempers after a transition between two specified areas of phase space is detected, giving much more robust results quickly. For example, we have shown this to be a superior method for studying the permeation of small molecules through lipid bilayers. We have also recently developed the metabasin metadynamics method, which restricts the area in which bias is added to a region which is below a free-energetic threshold, where this region is detected automatically and on-the-fly. This allows for more careful addition of bias without pushing the system into unphysical regions.

Second, in order to ensure the distribution sampled reflects experimental observations, new linear biasing methods have been developed that ensure experimentally observed averages or target distributions are recovered by a simulation with minimal perturbation. We have developed experimentally directed simulation (EDS) methods which discover the correct biasing parameters on the fly, and show how these can also be used to bias coarse-grained models. We have also developed an experimentally directed metadynamics method (EDM), which uses the same ideas of metadynamics to add bias to the system such that the system samples a target distribution. The EDS method has recently been applied in reactive simulations of water and water with an excess proton. Here we show that by only correcting the oxygen-oxygen radial distribution function of DFT water with a poor functional, we can greatly improve the structure and dynamics in the system effectively without additional cost. 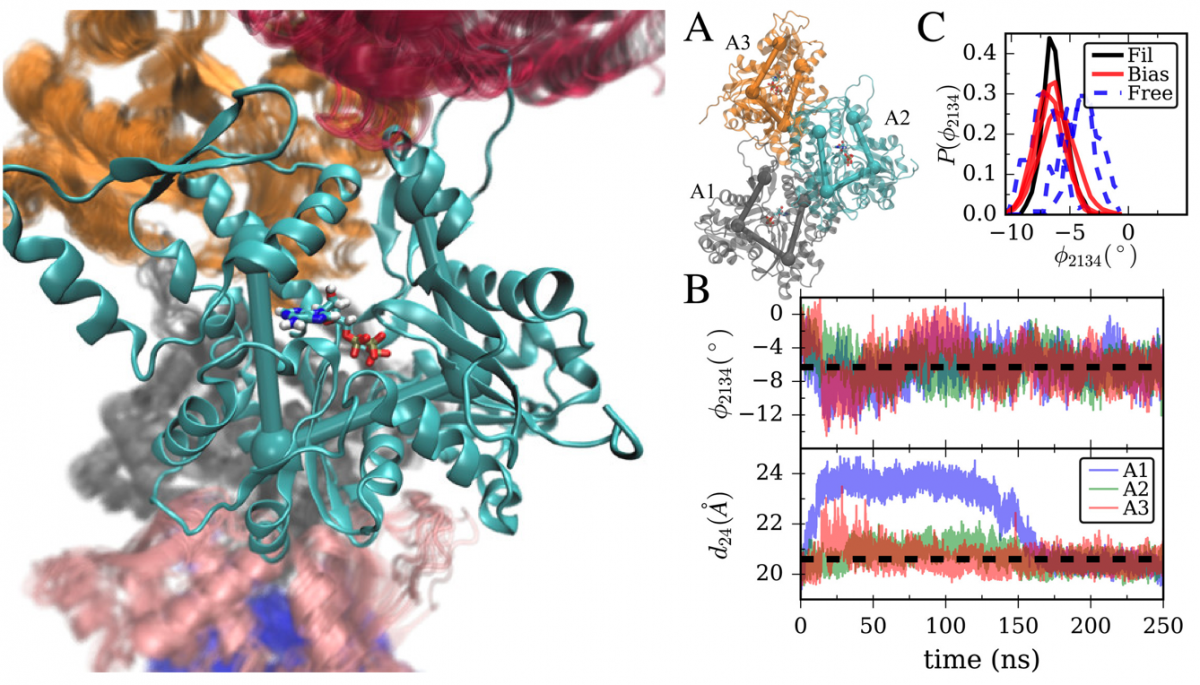 All of these new methods are all available and implemented in public repositories: